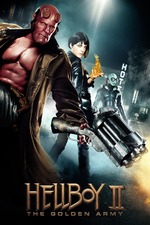 "I know what's important. It's you. I can turn my back on the world, all of it, as long as you stay with me." - Hellboy

See where it ranks among my top films of 2008!
Guillermo Del Toro Ranked

This was recommended to me by Hermes/Moritz. I always love talking to zir and I think you will too! Zir's super passionate and zir's reviews are really easy to read! Give zir a follow!
If you want to recommend me something, check this list out and see what other people have recommended me too!

Surprisingly improved upon the original in every way and feels a lot more like a Guillermo Del Toro film in the way it feels more whimsical, which strengthened the film as a whole as it leaned into more of the elements the director is good at: fantastical set and character designs and action scenes, a stronger script and emotional beats, and generally more freedom to tell the story he wants to tell.

While still retaining its sense of humor, the film felt like it wanted it one of the action films for the whole family whilst trying to be "mature". It also retained its sense of fun and here, it doubles down on that and for good measure. The characters and plot aren't taken as seriously and they really deliver on the those jokes, but when it takes its time to let you be with these characters, some moments can be really touching. It had more of a beating heart and I was surprised when I was starting to get choked up at certain moments, especially two drunk "freaks" singing "Can't Smile without You". The action scenes also deserve a mention because they're really good here.

Ron Pearlman (Hellboy) was really good as expected, but Doug Jones (Abe Sapien) stole the show this time around. He really needs to get more work.

Thank you for the rec, once again!

See what I watch next in The Stack and click here!