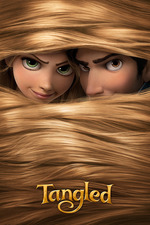 "Well, that's the good part, I guess. You get to find a new dream." - Flynn Ruder/Eugene Fitzherbert

See where it ranks among my Top Films of 2010 and click here!

This was suggested by Frandi Peralta as a part of the film of the week for the Film Club. Go follow him. He's a fine chap.

Disney likes to work its magic, doesn't it? I remember going to the theater when I was younger and not knowing much except for seeing the teaser of Flynn Rider (Zachary Levi) escaping. I fell in love with it then and I don't know why. Now I do.

The colors, the animation, the songs, the charm, the humor, the characters, and the relationship built between Rapunzel (Mandy Moore) and Flynn Rider (Levi). Not only that but the action, too. I cried three times while watching this and I'm proud to say that. I loved the little details like the way Rider and Mother Gothel (Donna Murphy) used physical touch when coming into contact with Rapunzel. That was brilliant and subtle. Also, everyone's so good here, especially Zachary Levi, Mandy Moore, and Donna Murphy.

My only problem is that I didn't like the joke that Maximus was an overgrown dog. While it was silly, it felt a little unneeded since we had Pascal, but it's whatever.

I love this film and think it's one of Disney's best. Great stuff.

🔙The Devil All the Time
🔜 BlacKkKlansman

Click here if you want to see what I watch next in The Stack.