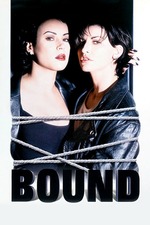 As often as I nod my head vigorously at his thoughts, I'm repelled by some of the oddities of his critiques. Case in point, Mike D'Angelo's 69/100 review for Bound makes two observations: one extremely helpful, the other not so helpful.

Let's engage with the unproductive aspect of his review right out of the gate: he claims that even with the Wachowskis' transitions, the film still feels like a "hetero male's lesbian fantasy" as opposed to whatever it is depicted on screen. I'm not sure what Mike meant with this bit. As he's a straight white male, does he have access enough to lesbian/queer spaces to gauge their authenticity? His strenuous declaration ("dammit, that is what it feels like" his italics) strike me as petulant, almost—as if the Wachowskis' transition were troubling his dogmatic understanding of fantasies, queer or not. I'm still not even sure what the use of mentioning this does to his overall feelings of the film: does he mean to understand the film in light of their transition? does he mean to resist retroactively reading the film? The latter is more likely as Mike's preferred critical methodology is one of ignoring wider cultural contexts for a strident focus on the text as the text.

His helpful note on the film is one that struck me also: he notices, "Pantoliano's Caesar essentially takes over as the protagonist" during the second half of the film. Once the plan is in action, Corky is either on the either side of the wall doing nothing or is literally bound and gagged in a closet. Corky has little to no forward momentum as a character during these sequences, serving only to watch passively as Violet and Caesar get increasingly more embroiled in the action. Mike doesn't see this is as a flaw in the film: in fact, he applauds the movie for taking a turn where other films might have tried to follow a well-trod path. In his earlier review (here, but not dated), he writes:

The film is at its most exciting when people (primarily Caesar, a less-hapless-than-usual fall guy played in fine nerve-jangling fashion by Joe Pantoliano) don't do what other people expected them to do

This shift in protagonist brings up an issue of what Mike calls "viewer identification." I'm assuming he means with whom the audience identifies and roots for. Though, I'm not entirely sure these two things are one and the same. He dubs it "identification" but then a sentence later refers to "how sympathetic" the audience might be. Can we not be sympathetic to a character's desires without identifying them? The theory of "identification" in lit crit assumes the process is unconscious: the audience may not even know they're viewing the protagonist as their "alter-ego" or what have you. A lengthy definition (here) of identification as narrative persuasion elucidates three vectors:

The answer is complicated, of course, as not all audiences are same. In fact, Bound represents a tricky proposition for audience identification as I've already noted above. Do straight male audiences undergo the same processes of identification as cis lesbians? As trans lesbians? The two points I'm pulling from Mike's review aren't entirely discrete, but rather feed into each other in fascinating ways, which speaks to, at least in my interests, the intricacies not of identification but of criticism as a discourse. The question of what, or rather whom, is privileged as a voice in criticism seems almost moot: straight white men dominate film criticism it seems. I almost want to imply, then, that what they have to say in absolute terms about identification is suspect, but I know people to be trickier creatures than easy pat answers.

In other words, I don't have any answers. My goal(s) with the preceding paragraphs were not to denounce Mike's reviews or his methodology, though this might have come off sounding like that. Rather, I wanted to trouble the waters of easy answers about identification and fantasies. Unlike Mike and David Bordwell, I find "empirical" research into the arts to be fraught with epistemological quandaries about how to measure or quantify what are such highly subjective and even impossible to articulate feelings about the art we consume. If we could easily demarcate what we are feeling with words, we wouldn't really need art to express that which is inexpressible.