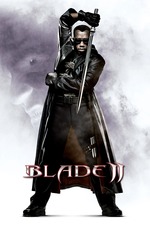 Blade, aka Day Walker, has devoted his life to hunting down and killing every last vampire. However when a new, more violent, species of vampire appears he makes an uneasy alliance with the vampire council. Teamed up with the vampires elite death squad, that was trained to hunt him, they seek out this deadly new enemy and unravel the mystery behind it's existence.

Wesley Snipes should permanently stick to stealing bases and killing vampires. The fight scenes with him and the rest of the "Bloodpack" are fantastic and he completely becomes Blade for his second go around. This story dives deeper into the vampire world and it was interesting to add another hunter of the vampires. Between the martial arts and special effects this is definitely my favorite of the Blade movies even though I think the villain on it's own was better in the first. I am giving this 4 out of 5 stars.

The Girl on the Train