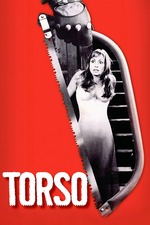 I am not 100% where I stand on this film. Is it purely a sleazy giallo or an attempt at a clever take on the whole genre. The first hour would certainly seem to suggest the first option. After what proves to be an important opening credits we are introduced to our players in one hit at an art lecture. The international female cast are pretty much all very attractive and young. Aside from the Italians we have Brit, Suzy Kendall (The Bird with The Crystal Plumage) and American, Tina Aumont (Modesty Blaise).

After a brutal double murder by someone with black leather gloves and a blade we are in familiar territory. What follows is a lot of voyeurism of the plentiful female flesh on display, a few more murders, childhood trauma and a lot of red herrings. There are also some obvious blink and miss them clues half way through. Men are killed as well but mainly off screen and without having their chests exposed after death.

The first half is standard giallo slasher material but then as the location changes the story shifts in to a more psychological suspense film. There are some quite tense moments in this segment although a failure to master stairs, twice, as a plot device is a bit weak.

As I mentioned there is an element of subverting the genre. It could be argued that the first half having a fairly deliberate misogynist tone and objectification is to make the audience complicit in the views of the killer and the murders. All the men are potential suspects and most of them are not shown in a great light. Although even as I type I am not really sure I believe that this is all an intentional angle from director Sergio Martino. Torso or Carnal Violence was his 5th giallo between ‘71 & ‘73 and they all liked to include some voyeuristic saucyness.

Depending on how you read the film may influence your overall enjoyment but it certainly has a lot of aspects to like. The location scenes in and around, I think, Perugia are beautiful. Also, as mentioned, there is of course flesh to be seen and a few decent kills, even if the effects are terrible.