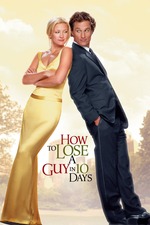 Watching Rom-Coms Because My Girlfriend Is Watching Star Wars (How to Lose a Guy in 10 Days):

Since my girlfriend agreed to watch every Star Wars movie with me in order, we thought it was only fair that I have to watch and review her favorite rom-coms too. Her first choice was How to Lose a Guy in 10 Days, and I was a little excited to see this one because I’ve never had the chance to see McConaughey in his prime rom-com years. I’m not afraid to admit that I actually kind of liked this movie. It was cheesy, but the good kind of cheese: the cheese that makes you happy, not groan in annoyance. I don’t know what she has cooked up next, but I’m glad I get to watch these movies she loves so much with her.

Overall Plot (3/5):
The premise is pretty classically funny. The whole plot rides on the wave of the one gimmick, but it’s a good one. The classic “each character doesn’t know the other’s motivations” works well here.

I thought that the ways Andy tried to make him not like her were big and really funny, but the ways Ben tries to make her like him weren’t as memorable. It was more just him dealing with her crazy antics.

I couldn’t help but think about how after she talked over the movie in the theater I would have lost the bet right then and there.

Characters (4/5):
I’m in love with the names Benjamin Barry and Andy Anderson.

This movies strongest category is its characters. I thought Andy and Ben were both fun to watch and the actors clearly had a fun time playing them.

Both of the main characters had friends that were enjoyable to watch too. Thomas Lennon and Kathryn Hahn stole the show in their scenes.

Chemistry (5/5):
They went great together. They’re both lovable in their own ways and clearly both have similar senses of humor in how they made these bets.

I thought the scene of Andy going to meet Ben’s family was a nice touch, and actually had a good bit of acting from Kate Hudson when she realizes maybe what she’s doing is wrong.

How They Meet (2/5):
I wish they had come across each other more randomly than those two Judys who had no business in this movie.

This gets points just because the premise of the coinciding bets brought them together, and I like that gimmick. Sue me.

Favorite Scene:
When they’re both singing “You’re So Vain” and they’re perfectly off pitch

Least favorite scene:
When she made him blow into the tissue in front of his friends, that was horrifying

Rom-Coms I Watched With My Girlfriend Ranked