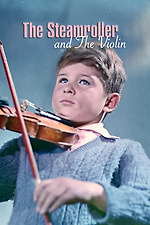 The Steamroller and the Violin 1961

I’d never seen a single Tarkovsky film until today. I kicked off my Tarkovsky filmography marathon with his directorial debut, The Steamroller and the Violin. And, uh, yeah, hot take here, the rumors are true people, he’s good...

The film’s only 45 minutes or so but what it accomplishes in that time clearly already shows the beginnings of one of the all time acclaimed filmmakers. Even for a short student film, the cinematography is breathtaking. It creates an almost otherworldly atmosphere from the streets and tight alleyways of Moscow. Reflection shots are common: from shattered glass distorting perception to a puddle on the ground beaming the sun right at the camera.

I couldn’t help but think about how these reflections were symbolic for how the young violin player, Sasha, and the steamroller, Sergei, saw each other. Sasha grew up an artist; he has a strict routine of violin practice and studies. On the contrary, Sergei was about his age when he went off to war, and now has to work as a steamroller to make ends meet. Sasha is equally fascinated with the hard labor Sergei conducts as Sergei is with Sasha’s music: you always want what you can’t have. I’m really looking forward to making my way through Tarkovsky’s films now.