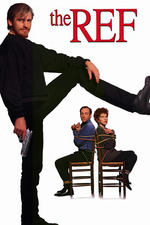 Another one for the "I'd never have heard of this if it weren't for Letterboxd" pile! This lesser-known Christmas classic falls somewhere between the criminal antics of the Home Alone films and the dark, dark comedy of Bad Santa, but with a much more low-key feel than either. Denis Leary's cat burglar, on the run from semi-competent local police, holes up with a bickering family and - I'm sure this isn't really a spoiler - brings them closer together.

It's pretty funny - I particularly enjoyed watching the kids faces light up with delight as their parents, aunts, uncles and grandmother shout abuse at each other - and the performances are great across the whole cast. Kevin Spacey and Judy Davis are extremely believable as the couple teetering on the edge of divorce; she's been unfaithful, he's being slowly ground into insignificance by his domineering mother. Glynis Johns is stunning as the mother, hamming it up gloriously, she's completely monstrous - and hilarious.

The style of the film hasn't aged quite as well; the music is cheesy and the whole thing just reeks of that awkward bit of the 1990s which were basically the 80s but with all the colour removed. That's not too much of a complaint though when the characters and performances are so good. I'm not sure this will become a regular festive rewatch for me, but I'm definitely glad I've seen it - thanks Letterboxd! Merry Christmas!