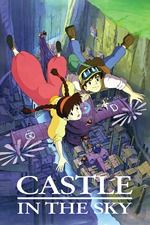 I’ve become skeptical of the unwritten rule that just because a boy and girl appear in the same feature, a romance must ensue. Rather, I want to portray a slightly different relationship, one where the two mutually inspire each other to live - if I’m able to, then perhaps I’ll be closer to portraying a true expression of love.
Hayao Miyazaki

Fun fact: this was the first movie to be made by Studio Ghibli what a amazing start

Castle in the Sky came out in 1986 and it was directed by Hayao Miyazaki and its about this boy (Pazu) and this girl (Sheeta) as they are chased down by government, pirates, and the army as they try to find a castle in the sky (GET IT) which apparently holds the reason for why Sheeta and Lapatu are connected. I didn’t think this was gonna be a great movie I thought it was just gonna be good but to be perfectly honest I think this is my favorite Ghibli movie so far besides Spirited Away so i’m gonna explain why I love this movie so damn much.

The everything: Before I start I watched the English dub yes I know dubs usually suck but Mark Hamill played the villain and the dubbing actually was decent so yeah. The animation is just so beautiful as always I mean goddamn the parts in this movie where they’re in the sky I could look at those goddamn images everyday the sky is just so blue and beautiful and the actual Castle in The Sky looks like heaven itself I would kill to live there. Also I actually liked the villain mostly because Mark Hamill is a voice acting god he always just sounds so evil and malicious and its great and I like how he gets more and more insane as the movie goes on like in the beginning he seems calm but by the end he corners a little kid and puts her at gunpoint HE SHOOTS HER HAIR OFF LIKE JESUS CHRIST!. Dola was honestly fucking hilarious and her jokes never really broke the tone of the movie which was a good thing I liked how she grew more soft hearted as the movie goes on because I love that character writing when it is done well. My favorite part though was the relationship between Pazu and Sheeta it felt genuine and I like how they don’t exactly fall in love a lot of relationships in Ghibli movies are a lot more realistic than how other movies portray relationships and I admire that. I like how Hayao Miyazaki writes female characters unlike Marvel who thinks girls just being strong is a good personality trait (CAPTAIN MARVEL) Nausicaä and Sheeta are good examples of that. I
adore the action in this movie it feels like a 1980s movie ( I know it is but still) and the stakes feel real like I was legitimately worried about these characters. The sound design is perfect to be honest! Like the sounds of the machines and stuff like that. THE SOUNDTRACK WHEN PAZU PLAYS THAT SONG ON HIS TRUMPET IS JUST SO GODDAMN BEAUTIFUL AND ICONIC I COULD LISTEN TO THAT SHIT ALL DAY. Joe Hisaishi is a good composer and he doesn’t have an Oscar you wanna know why? He’s too fucking cool for an Oscar! Also this movie is a great rewatch you know how in some movies when you rewatch it again it kinda gets ruined or something like that? Not this movie!

So yeah I fucking adored this movie! Next up is Kiki’s Delivery Service and i’ll try to get that up really soon!