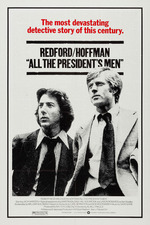 ‘All the President’s Men’ delineates the revelation of mystery, politics and cover up of The Watergate scandal; one of most headlined political scandals in USA, leading to the resignation of president Richard Nixon and indictment of 69 people (among them, many were top Nixon administration officials). The movie primarily focuses on two journalists from The Washington Post—Bob Woodward and Carl Bernstein—and their arduous efforts to get to the depth of this whole scandal. With their anonymous sources and conductance of hitched interviews, they connect White House with the ‘burglary’. Subsequently, their scratching of details and telephone conversations reveal the surreptitious involvement of CRP and CIA.

‘All the President’s Men’ showcases persistence and essence of true investigative journalism. ‘Persistence’ of indulging into stultifying door-to-door field work, facing obstacles to get information for corroboration of the story and ‘Essence’ of providing truth about the facts behind a scandal which could have influenced future elections. Unfortunately, these terms can not be acquainted with modern journalism.

Even though the movie focuses too much on portraying the journalism in its truest form, it is still pretty much a masterclass on storytelling. That being said, storytelling in this movie was never a question of what, as everyone is aware of the incident, it was rather a question of how. The film does not claim to create sensations or it simply didn’t need to, all it does is simply telling everything precisely as it happened. I also loved how it uses telephone conversations to unfold the so called mystery.

Personally, I really liked this movie, it is definitely one of the best movies I have watched based on true incidents. And what can be a better icing on the cake than a solid Dustin Hoffman performance.