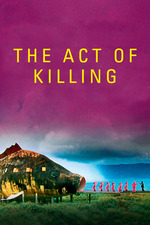 A political surge is sweeping the Indonesian floors with crime and murders and Joshua Oppenheimer and his crew interview the gangsters for an in-depth view of the war-stricken situation of the place.
Politically divergent, the ruthless kingpins are aware of the communist interventions and will kill by any means possible to eliminate them.
The title suffices the core content of the film as a film within a film is exploring the raw brutality and unfiltered ways of killing a person and imposing and including that in a film for the sake of originality, which is atrocious and unflinching, to say the least.
Sliding apart from the conventional film-making methods, Oppenheimer uses vivid elements, achieving great artistic symbolism to foreshadow or lighten the mood of the depravity of the heinous minds.
The blatant corruption in the states and power exploitation of the 'rulers' who are seemingly the mass murderers is contempt to the government which actually has been brought up to the public.
Even though a few sequences felt to be unnecessarily stretched out, the overall effect on the staggering pace gets obliterated.
Oppenheimer's unorthodox documentary doesn't at all feels like a documentary but an unbelievable personal experience of atrocity, which has affected countless Indonesian lives.