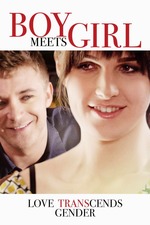 Rocky start to this one, lot of rough dialogue and on-the-nose bigotry & counter-bigotry moralizing, and the way a certain military character is portrayed is borderline offensive, but I'm glad I gave BOY MEETS GIRL a chance because the complicated denouement (and final shot) is quite sweet.

Michelle Hendley's performance is good in a role unlike any I've ever seen in cinema, and IMDB says she will play "Sally Ride" (!?!) in a new NBC show The Player. Could be interesting.

Michael Welch's performance here is great, and IMDB says he's been in a bunch of movies and shows but I don't recall him ever making an impression like this.

The Best of Me

The Dramatics: A Comedy