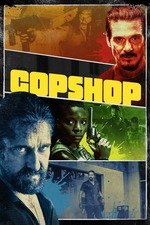 Copshop is an entertaining little movie that takes a very simple idea and does its best to elevate the material on the page.

Writer-director Joe Carnahan is good and finds creative ways to keep things interesting and create intense scenarios where things feel unpredictable for the story and characters.

The editing and cinematography are a big part of this, but Frank Grillo, Gerard Butler, and Alexis Louder are all solid and make their characters more interesting than they would have been otherwise.

Something the film does that can be considered both a pro and a con is that it tends to have its characters be very ambiguous. They don't have a lot of development, and that keeps things interesting when they clearly know something the audience doesn't. But, that ambiguity comes at the cost of not really being able to latch onto anyone in particular beyond having hopes for where their arc will go and not wanting them to die.

This movie incorporates humor in a way that can initially feel a bit off-putting, but becomes more entertaining the more it goes on. It's actually pretty funny in some unexpected ways.

The pacing in the first act is too heavy on setup that doesn't quite feel like it gets a satisfying enough payoff, but the second act is a lot of fun and kept me on the edge of my seat for a good while. The third act, however, is where the film lost me a bit. There is a lot of shock value that doesn't feel well earned, and there are some scenes that just don't make a lot of sense and push logistics a tad too far. The ending also feels somewhat rushed and leaves a few too many questions unanswered.

Overall, this was a fun time that has a fair share of problems, but is largely entertaining and presents some cool situations for these characters to be in. The end result isn't always the most satisfying, and the script could have used some more character development, but this was a pleasant surprise and I'm glad I saw it.