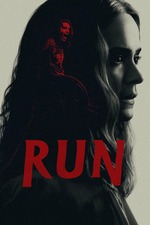 This is only Aneesh Chaganty's second film, and while it's not quite as good as Searching, Run still manages to stand entirely on its own in a completely different way. The plot is fairly straightforward and it's pretty easy to figure out where it's going early on, but everything in between is anyone's guess. There are so many gripping, nail-biting, intense sequences that play out extremely well. There isn't a single dull moment throughout the film's very short runtime and to say that I was invested would be a massive understatement. There were several scenes where I'm pretty sure I wasn't even breathing or blinking.

Sarah Paulson is great in this, and that's kind of a given. But the real standout is newcomer Kiera Allen who excells in this. Everything from her reactions to her timing to her expressions were spot on and I honestly can't imagine anyone better in the role. It also really helps that these are smart characters. They're always trying to outsmart one another, and trying to figure out how things will go down was extremely engaging in of itself.

Overall, this is a really well made thriller that does admittedly have a predictable plot, but has so many well edited, written, and directed scenes that keeps you guessing, even when you think you might know the answers. It's not a perfect film by any means, but as far as thrillers go, this was a hell of a ride, and I can't wait to watch it again.