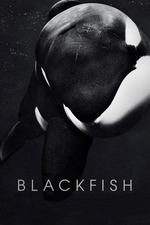 Those are not your whales. Ya know, you love them, and you think, I'm the one that touches them, feeds them, keeps them alive, gives them the care that they need. They're NOT your whales. They own them!
-John Hargrove

After their defeat in World War II, the Nazis laid low for almost 20 years and then resurfaced to open a chain of marine theme parks called... SeaWorld. This is the untold story.

Seriously though Gabriela Cowperthwaite puts together a great documentary chronicling a killer whale named Tilikum's involvement in three separate incidents that took the lives of three people. The talking head documentary has various interviews with former SeaWorld employees while SeaWorld declined any participation making the doc very one sided, but seriously most documentaries are one sided.

Tilikum isn't the only Orca featured and his incidents aren't the only ones explored. In the moment I thought the film made an incredible argument that yet again proved that large industries with practically no government regulations do poor jobs of regulating themselves. With that said, I still wanted to check online for the obvious criticisms the film might have and found SeaWorld's official response to the film which is the following:

"Blackfish is billed as a documentary, but instead of a fair and balanced treatment of a complex subject, the film is inaccurate and misleading and, regrettably, exploits a tragedy that remains a source of deep pain for Dawn Brancheau's family, friends and colleagues. To promote its bias that killer whales should not be maintained in a zoological setting, the film paints a distorted picture that withholds from viewers key facts about SeaWorld -- among them, that SeaWorld is one of the world's most respected zoological institutions, that SeaWorld rescues, rehabilitates and returns to the wild hundreds of wild animals every year, and that SeaWorld commits millions of dollars annually to conservation and scientific research. Perhaps most important, the film fails to mention SeaWorld's commitment to the safety of its team members and guests and to the care and welfare of its animals, as demonstrated by the company's continual refinement and improvement to its killer whale facilities, equipment and procedures both before and after the death of Dawn Brancheau."

What I found odd about their "rebuttal" is they accuse the film of being inaccurate and then goes on to mention various things the film failed to mention... none of which has anything to do with Killer Whales except for the "continual refinement and improvement" to the facilities. So basically they say the film is inaccurate and then go on to mention a bunch of gobbly gook that the film makers can't rebut because... well it has nothing to do with their damn film. If you go to SeaWorld, the terrorists win.