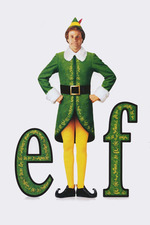 Modern Christmas films come and go with little new to offer before they are forgotten or until you're forced to watch them again because the child of the house found one on a tv channel that was too cheap to get one of the good Xmas films to air and you're forced to relive the likes of Jack Frost. Every few years though, you'll get something new that's worth watching with lasting appeal like Elf.

Jon Favreau's feature film directorial debut, Made, was a critical hit. He had written that, and also Swingers. I'm not entirely sure how he went from those two films to directing Elf, but I'm guessing it was to prove he could make a studio film. Believe or not though, if you're familiar enough with Made and Swingers, you'll recognize Favreau's touch from both those films in Elf and he manages to make it work in a family oriented film.

For me the reason Elf works so well is that it goes back to basics in making a "cynic free" Christmas movie. It's just goodhearted entertainment that is legitimately funny. It doesn't try to be cool, or pander to the latest trends. I could easily see this film in the wrong hands where they would have made Buddy a character with no intelligence filled with crude circumstances. As it stands the crudest thing Buddy does in the film is a 12 second burp.

That's the key to Will Ferrell's performance as Buddy, his character is basically a very innocent and naive child. Ferrell keeps himself from going overboard and keeps the character charmingly innocent throughout the film. I find the small random moments, like getting hit by a cab, just as hilarious as the bigger setups like Buddy meeting the "Mall Santa".

The cast looks so random on paper, but watching the film they are all perfect. First off having Bob Newhart as Papa Elf is comic genius. Newhart's delivery hasn't changed in over 50 years because he's basically the same character in everything and it doesn't matter because it's still funny, but funnier still when he's an elf. Zooey Deschanel acting charming is nothing new, although I think she looks better as a brunette. Looking back on it now, James Caan cast as Will Farrell's dad just makes complete sense.

I hadn't watched the entire film in a number of years and I have to say that it has earned it's right going forward in my annual Christmas rotation. Even though the film is 9 years old now, I still think it took guts and talent to make such a good natured and heartfelt Christmas film while having it turn out so damn entertaining.