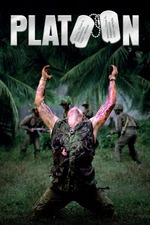 There is an array of Vietnam War films but this is certainly one of the most acclaimed, having won Best Picture at the Oscars. It was far closer to the conflict than we are today, however, and its depiction of the nightmarish nature of war would almost certainly have seemed more visceral to viewers of the time. Can this still act as an important exploration of morality and war?

As befits a film about descending into something truly horrific the protagonist is fresh faced and out of his depth. Chris Taylor (Charlie Sheen) joins a platoon comprised of a motley crew de facto led by Sergeant Barnes (Tom Berenger) and Sergeant Elias (Willem Dafoe). Events unfold sporadically into confusion and violence, and Chris sees himself change as he gets deeper into this world.

Unquestionably it's a film focused on the horrors of man and war, both being explored in breadth and depth. There is confusion, moral weakness, desperation — a range of experiences that show different facets of human life and how war turns it into a brutal, warped microcosm of our condition. It's intelligent, an attempt made to make characters more than mere tropes.

A hamminess, however, makes it less smart than it wants to be. Broad performances, obvious symbolism, on the nose narration, and bland cinematography make the film lean close to self parody. It wants to show that war isn't cinematic and to subvert traditional heroism; it just doesn't have the self-awareness or, perhaps, the trust in its audience to not feel corny.

It's a good film and one with important messages. The importance of the story, however, and the tantalising thematic ambition, is undermined by tonally confused and generic presentation. The themes might have made it seem more impressive once, but now you won't find yourself reflecting on what it all means: you'll unfortunately feel you've just watched a decent TV movie copy of a serious, timeless film.

Sorry We Missed You