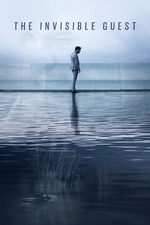 When it comes to movies that I would have never heard if it wasn't for people reviewing it in here, there's not a movie that encapsulates this better than CONTRATIEMPO aka The Invisible Guest. And after times of putting it back, I finally got to watch it and all I can say: thank you for the headaches -.-

This is one of those movies where you can simply skip the really good performances, the great cinematography and its use of temperature to distinguish a flashback of current times - because the truth is none of it matters, this, like a "Predestination" or Agatha Christie novel, the story is the most important element of the movie. This is also its often weakest and most troublesome element.

The movie deals with a man who has lost his lover and is being charged for murder her, this will lead his lawyer to hire a specialist that help him understand what happened and save him from jail. Things turn much stranger and disturbing when not only our guy was knocked down before the crime but the whole lock and windows were all locked from inside, meaning there might have been a ghost or someone brilliant... or something else. I could go on and on and on, but this is one of those flicks where its better for you to go in knowing the least possible. Also its one of those flicks where you have to be fully alert, cause there are more twists than the dance, the game and the movie altogether.

All in all, a very thrilling and suspenseful feature filled with many ambition and whose supposed brilliance, just like our lead, might also lead him to his demise and let him to commit some mistakes (and by mistakes I mean potential "plotholes").