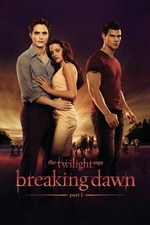 Ohhh you thought I was kidding when I said things will start to change and drop nonsense as the series progress, huh? Well, here's another example, we just went from a teen drama to Dallas with vampires. Also does the whole banging in here means this is no longer a YA film, but an adult? Hmmmmm.....

Look, the beginning of the end keeps making escalating things up, now to high level of bonkers. The soapy tone sorta makes the whole stupidness that is the love triangle much bearable and gives it a lot more... sense? If that word exists in this saga.

Back to the cinematography, and for the first time ever, direction, the whole way many of the dream sequences are shot and staged are really good. The wedding one was top 2 most memorable moments in the whole saga. Perhaps the best of them all. Also props to the makeup and visual, in the case of the latter even though they fail here and in the past entries with the questionable wolves designs (lets just say white doesn't fit the green screen) sorta made a good job skinnying Kristen.

Because of the soapy tone, even some of the bad acting got to actually look rather better. Though, differently to second part, it seems like they don't have too much to do, even though they are given a lot to. The acting here is a paradox.