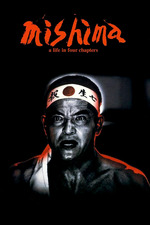 As soon as Philip Glass's score started to rise up, I knew I was in for a trip.

I have never read any of Mishima's literature, but seeing some of his work come to life within the film has me intrigued to read his work.

One of the most poetic films I've ever seen, especially coming from a biopic. The visuals and stagecraft alone elevate this film to a plane of artful existence that I can't even describe.

The blending of past, present, and fantasy portray the story of Mishima through personal endeavors through four chapters, three of which are events from his novels with the final chapter being the final day of Mishima's life. They all culminate into one huge story, that covers a plethora of themes.

A masterpiece of interwoven realities.