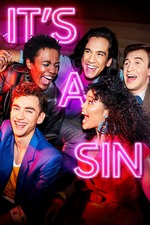 “Another pint for the bender, please!.”

Each time Russell T Davies writes something for TV, he does something special. Something unexpected. He creates masterpieces of the small screen. He creates utterly captivating and emotionally engaging stories and It's a Sin is no exception to the rule of thumb.

Retelling the first years of the AIDS crisis, from the early 80's all the way through to the break of the 90's, this five part series explores not only the outbreak and fast spread of the virus but the stigma surrounding how men contracted it through homosexual lifestyles at a time when homophobia was at its utter peak in society.

I really didn't think Davies could top his work with BBC One's Years and Years but I can confidently say that this here might be the holy grail of his work. Whilst being dramatic and incredibly emotional, it's also startling in its educational element for someone like me, I didn't really know a lot about AIDS given my age, it's never really been as big a topic during my lifetime so to be given a glimpse of just what it was like is eye opening to see the least.

The cast are sensational, Olly Alexander, Lydia West and Callum Scott Howells are easily the standouts and I think, I hope we'll see them all going on to do much bigger and better things after this. All three absolutely blew me away and it's nice to see that RTD seems to value West, bringing her over from Years and Years. She's bloody marvellous.

I think if this somehow doesn't win some serious awards & accolades, we'll know television is done for. A fantastic start to 2021 and another huge victory for Russell T Davies career. That man continues to go from strength to strength and I can't wait to see what he comes up with next.

Euphoria: F*ck Anyone Who’s Not a Sea Blob