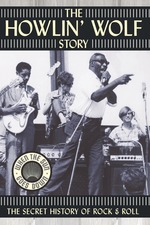 Howlin' Wolf, aka Chester Burnett, came out of the deep south, out of the fields of Mississippi, out of a super-religious mother who stuck so firmly to her guns that Blues was "the devil's music" that she never spoke to her son for decades, out of racism and hardship, and made his own original, vibrant kind of music. He wasn't alone, as others like Muddy Waters came into prominence (and, according to a special feature on the DVD that should have been included with the rest of the doc, had a rivalry for some time), and shook up popular music first for black audiences and then slowly but firmly whites.

It's a remarkable journey, told with not a whole lot of style as a kind of direct-to-video approach, with a plethora of good facts and some humbling opinions (one of Wolf's closest musician friends and band-mates, Hubert Sumlin, provides the most entertaining anecdotes as a die-hard blues-man through and through). Plus, of course, the music, with some rare performances and even some home movies shot at Chicago clubs, of the Wolf's presence and magnetism coming out in strong forcefulness as he does crazy things on stage like lick his guitar and crawl on all fours. Whatever you want to say about his music it's inarguable that he doesn't get your attention, if only through that distinctive voice that's a sounds like it's been run-over and resurrected as an all-powerful bad-ass.

Thankfully, too, in such a short running time, there's a limit of how much drama there usually is in a musician-bio pic. Then again, Howlin' Wolf wasn't as naughty as other musicians: he didn't sleep around as a ladies's man (at least, from the doc's perspective, as much as say Muddy Waters), was a devoted husband and father, stayed away from drugs and most drink (he was so against it he openly criticized Son House during a performance), and only had his one real stinging problem being a lack of communication with his mother. While one wishes the movie was longer- more detailed, more infused with that pure air of rhythm and blues- what's here is enough to whet the appetite. At the least you'll want to put on some Wolf on the stereo right away or rush out to find some kind of record. He wasn't maybe the #1 best blues-man in America, but he certainly left his mark like only few others did. This doc is a good tribute to the Wolf's spirit.