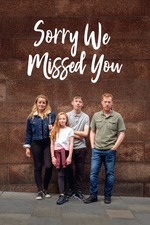 Sorry We Missed You

What exactly are Ken Loach's films for? I don't pose this question as a dismissal, because I actually admire them quite a bit, even if they usually don't come together as well as I'd like. But I am genuinely wondering what he and usual screenwriter Paul Laverty see as their primary mission. Are they trying to entertain? Educate? Do both simultaneously? Provide a model for a uniquely working-class form of popular culture? It's difficult to say.

I think about the great 19th century Naturalist novelists, both on the Continent (Zolá) and in the U.S. (Theodore Dreiser, William Dean Howells, Frank Norris), and how they spent so much effort detailing not only the lives of their protagonists, but the massive social relations in which they were ensnared. The closest that the cinema has ever come to this kind of work would be the documentaries of Frederick Wiseman, and they are radically anti-psychological and always focus on multiple subjects at once.

But Loach almost always gives us one main protagonist, and possibly a secondary one. What this means is, the didactic aspects of his films -- the attempts to articulate the problems with the current state of capitalism, its bureaucracy, its rapacious profit motive -- are enfolded into private, individual stories. This doesn't seem very "theoretically correct," since the nature of structural inequality is that it is supra-individual, and not based on a person's "choices." But more importantly, it leads to dramatic implausibilities. Loach and Laverty seem to think we (whoever "we" are) cannot sympathize with a cross-section of society, that "realism" demands a primary point of identification.

So you end up with films like I, Daniel Blake, which take contextually reasonable occurrences and pile them onto single individuals, rather that evenly distributing the bad outcomes. So a man cannot simply be caught in a catch-22 that threatens his livelihood; he must also suffer a heart attack in the bathroom. A woman cannot just lose her dignity in a food bank; she must also slip-slide into sex work.

The net effect of this approach is self-cancelling, since instead of displaying what we are all subject to under forms of tyranny we all share, it makes these situations look like horrible luck. Sorry We Missed You has lots to say about the rabbit-hole of no-contract labor, where the hiring firm (in this case, a logistics company) is really just there to dock your pay and offer you no support whatsoever. And the film occasionally addresses the equally difficult position of "freelance" caregivers who are tasked beyond any reasonable expectation while privatization and Tory cutbacks make it a necessary stopgap in a failing senior care system. But Loach lets family drama and "kitchen sink" genre tendencies muddy his message.

This is not to say that the family dynamics in Sorry We Missed You are not dramatically potent in themselves. The film does a fine job of detailing how an inhumane work schedule can destroy a family. Ricky (Kris Hitchen) loves his wife and kids, but the job plays on his already raw feelings of failure as a man, a sore spot his son Seb (Rhys Stone) zeroes in on quite adeptly. The conflicts between Ricky and his wife Abbie (Debbie Honeywood), especially over parenting, and selling the family car, are effective at underscoring the way the gig economy exacerbates gendered inequity and false perceptions of care as easier or softer work.

But what the film desperately requires is a comparative method, some kind of perspective outside the British nuclear family. How does this lopsided economic arrangement exploit immigrants? How does it pit the young against the old? How are delivering packages and delivering care, in the eyes of capital, exactly the same, even as they are existentially different? These are things I am sorry Loach and Laverty missed.

The Blood of a Poet