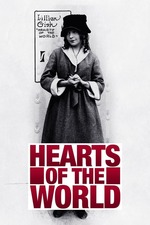 Hearts of the World

It all starts with the ups and downs of naive melodramas in an apparently idyllic village. But aren't all villages apparently idyllic places, anyway? Is Griffith suggesting we question the naivety? From what I've seen so far from him, it's never only a matter of showing a lovely story, and the way he caresses Gish here (e.g., the fabulous pan to her feet, not to mention her otherworldly eyes) alludes to a sensuality with more subtle emphasis than many after him. He doesn't push it further along this way, though. Griffith sets up a world about to change, because when war arrives the idyll is gone. Romance in times like these becomes a struggle, peace is shuttered. The contrast in montage between the establishing of romance and the devastation of war is very effective. First Griffith builds up our characters, their love and their jealousy, their tears, their laughs, and their destiny. Time is in their hands, forever and ever. Then the end of the world intervenes, and we live it through a montage that switches gear and moves us along with the leads' emotions. A devastation that changes everything, forever and ever. Griffith is pounding on our hearts.