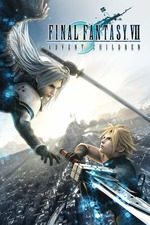 This is how not to do a sequel or a video game movie. If you haven't played the original FF7 and Crisis Core don't even bother trying to watch this, it's incomprehensible. While one could argue that's just its nature as a sequel, it's not even good as a sequel either. Disregarding all of Cloud's growth as a character and his overcoming of Sephiroth (Which the Director's Cut lampshades with Not-Force Ghost Zack), this movie instead opens up intentionally with Cloud as a brooding loner angsty and full of guilt over Aerith's death and Zack's sacrifice to save him. This entirely disregards his growth past that and recognizing that it was Sephiroth's fault not his. While I could have accepted him having to learn that Aerith is gone (The original game ended with Cloud on his way to go find the promised land and Aerith) Advent Children doesn't do that at all. Instead Cloud's just on his own brooding when they had the perfectly open way of just having him be trying to find it.

The other main characters don't get much better treatments, Tifa is just here to argue and nag Cloud and the rest of the party members only show up for the action scenes, poor Red XIII only gets one line of pointless dialogue as a result of stunt casting. Rufus Shinra is somehow still alive and looking entirely undamaged despite getting hit with basically Godzilla's atomic breath and the Turks are fun (The two which show up for more then like one scene) but they're like the rare highlight.

Sephiroth's plot in this movie is a complete mess. Despite being built as Cloud vs Sephiroth: The Movie it does not feel that way at all. Sephiroth has no build-up beyond the Complete/Director's Cut saying he's still alive in the Lifestream, an awesome concept they don't do anything with. There is no build-up to him at all, he just forms with one of his mini-clones (Who get no explanation) and that's it. The mini-clones are annoying anime boys at their worst and have the most annoying voice acting in the dubbed version (The one I watched since I play these games in English since I'm not a weeaboo). They're nothing characters and worse they're boring. Sephiroth's motivations are not fleshed out at all and it feels more like he's here just to bully Cloud more then anything. While one of his lines "I will never be a memory" takes on a lot of meaning after FF7: Remake, that's about the only memorable thing from this Sephiroth besides introducing George Newbern's amazing performance (Even if it's held back by the janky dialogue).

The plot is hard to follow in general with scenes frequently having awkward jump cuts and weird placements time wise that don't really matter and are more here just to be confusing. It's a shame that this script totally ruins the film since the animation is amazing for 2005 and the action is some of the medium's best. Nobuo's OST is also fantastic giving us one of the best renditions of One Winged Angel out there.

Overall Advent Children is something I'd only recommend to hardcore FF7 fans or someone who wants to experience everything that comes into play in regards to FF7: Remake. If you're not either of these parties, skip it.