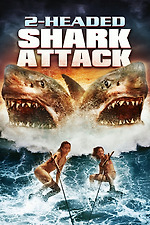 2-Headed Shark Attack is one of the worst pieces of garbage to ever grace the screen. And I love it. It's one of those films that I like that I can't in good conscience rate any higher than what it deserves, but that I still get intense enjoyment out of. It has a star-studded cast, proudly featuring Carmen Electra and Brooke Hogan (yes, Hulk Hogan's daughter), as well as an Aaron Eckhart lookalike. It also contains one of the most ridiculous, outlandish "plots" of any film I've ever seen, right up there with another one of my favorites, Sharknado.

Words cannot even begin to describe how bad this film really is. The acting is hilariously atrocious, it looks like it was shot and edited by a 12 year old with epilepsy and hardcore ADHD, and The Asylum's patented terrible special effects. This last bit is mostly the completely unbelievable CGI that we're used to, but we also have a couple of big fake rubber shark heads that, no matter how the camera shakes or how quick the cuts are, have hilariously apparent flimsy rubber teeth that flop around and bend whenever the shark bites down on something.

Every well-known rule of filmmaking is broken here, seemingly without a care. We get to experience ridiculous continuity errors, complete disregard of matching shots and environments, and far too much use of deus ex machina to drive the plot. Absolutely nothing in this film makes any sort of sense, but it has me falling out of my seat laughing every time I watch it.