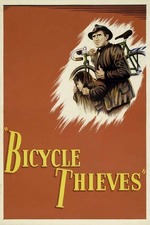 A Century of Cinema Challenge: 1948

If there has ever been a film that has defined a generation, then Vittorio de Sica's Bicycle Thieves is the film that defined post-WWII Italy. A beautifully simple film, it follows Antonio Ricci, a poor man who finally is offered a job that would allow his family to start living comfortably again, after years of living in poverty. But once his bicycle is stolen, preventing him from doing his job, the rest of the film is a bleak odyssey as he desperately searches for the thief, his journey leading him down some questionable moral pathways.

The power of Bicycle Thieves comes from its simplicity. The story isn't grand or even that exciting, but Antonio is a character that anyone can relate to, and de Sica's decision to use non-actors provides an earnestness to the characters that allows us to step into their shoes. The relationship between Antonio and his young son, Bruno, is particularly tender and a major strength of the film. Bruno is a child who has been forced to grow up faster than normal, also working to help provide for the family, but despite this he still maintains his childish innocence and looks up to his beloved father for guidance, making some of Antonio's choices that much more heartrending.

Bicycle Thieves is a film of simple survival and the drive to persevere, only because there is no other choice. De Sica's cinematography isn't flashy, but is strong and minimalistic, perfectly lending itself to the film's realism. It's a film that it's hard to not find yourself charmed by, but each fresh tragedy will still break your heart.