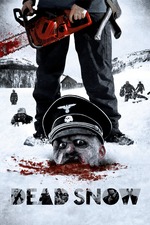 I thought this movie was great. Not because of incredible directing, acting, or script, but for the simple reason that it's a Norwegian Nazi zombie film. It's full of delightful cliches and suitably cheesy moments. To top it all off, terrible Norwegian pop songs serve as a soundtrack for several scenes including a montage of two characters taking on a horde of Nazi zombies with a chainsaw and a sledgehammer. The acting is sub-par, but the writing doesn't call for great acting, because what matters most in a movie like this: dynamite script and stellar performances, or seeing a line of decaying Nazis mowed down by a WWII era machine gun mounted on a snowmobile?

One thing the film does quite well is makeup and live effects. It's difficult to find an action or horror movie made in the past five years or so that doesn't use CGI, and I didn't catch a single CG moment in Dead Snow. It's full of fake blood and intestines instead, which definitely contributes to the feel of the film and calls attention to the older classic zombie films.

Dead Snow is great fun to watch. It's nostalgic and cheesy and most importantly, doesn't take itself too seriously, which plays a huge role it what makes it such a great film. Definitely worth a view.