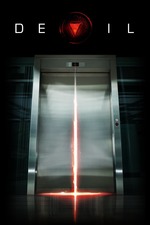 Is this movie really as recent as 2010? I remember seeing it in theaters and liking it, and as I was rewatching it, I made the excuse for myself that I probably liked it because I was little. But if this came out in 2010, that means I was 17, and that is absolutely not young enough to justify liking this film. So I'm pretty disappointed in 17-year-old me. Devil is a cool concept with an incredibly sloppy execution.

While it's shot pretty well, using some creative techniques, the visuals don't make the writing bearable. That was my biggest problem with this film. The dialogue was cheesy, heavy-handed, and far from subtle. Characters jump to wild conclusions (including one who is supposedly a police detective, and should know better) and are often correct somehow. My favorite (which I say sarcastically) was that the one who immediately recognizes the presence of the Devil is the Hispanic security guard (cliche), and he comes to this conclusion by throwing a half eaten piece of toast up into the air and seeing that it lands jelly-side down. Because that is the epitome of evil right there. Not only is your toast fucked up, but now you have to clean jelly off the floor as Satan's mocking laughter surrounds you.

Other than a really bad script, this film suffers from a lack of subtlety in general. It isn't really that suspenseful, it isn't scary, and the ending is not at all satisfying. And to top it all off, it's got one of the worst movie soundtracks I've ever heard. In a film that's supposed to be mysterious and suspenseful, I would want music that matches that tone. What does Devil do? Makes you think you're experiencing the battle of Helm's Deep if you close your eyes. Roaring low brass and drums signal that something bad is going to happen in a confined elevator containing a couple of people, and it just confuses you and makes you wonder where you are and if the editors accidentally were given the soundtrack for an action film and just put it in anyway. Devil is mostly just a series of questionable decisions. It's understandable why M. Night Shyamalan didn't want to direct it. You can only put your name on so many bad things. This is one of those films that I would be perfectly fine with someone just remaking as if this one didn't exist, because I would love to see this cool concept done right.