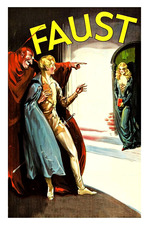 A Century of Cinema Challenge: 1926

Why Murnau's Nosferatu gets more recognition than this gem, I will never understand. While Nosferatu is certainly iconic and has carved itself an important niche in film history, Faust is a better film in almost every way imaginable. It's far more unified and better paced, excluding the second act, and Murnau seems to have a much stronger vision for this story. The effects are stunning, even almost a century after its release, and produce some powerful imagery, particularly the shot in which the devil looms over the small German town, spreading his wings and casting a shadow of plague and death. The common elements of German Expressionistic mise-en-scene can be seen if full force, creating a beautifully dark, gothic atmosphere.

I found the cast to be much stronger in Faust than in Nosferatu as well. Gosta Ekman plays the eponymous Faust, both old and young, showing the remarkable quality of the makeup in this film. I was firmly convinced the two were played by different actors until I more closely examined the credits. Emil Jannings gives a gleeful and over-the-top performance as Mephisto, which does feel a tad overdone at times, but stems more from a clear delight in the role rather than bad acting.

As I mentioned previously, Faust's only real weakness comes in the form of the lengthy second act, presenting the wooing of Gretchen, that feels so tonally different that it could almost be another film. While it isn't bad in and of itself, it drags on for long enough that its camp starts to effect the overall tone of the film. Fortunately, a tight, clean third act restores the sense of atmosphere and brings the film to a satisfying close. I firmly believe that in studying Murnau, Faust should be the introduction to his work rather than Nosferatu. Not only is it a better film, but it's a much better example of the German Expressionistic style, and more fun all around.