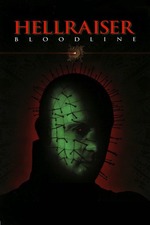 Hellraiser: Bloodline is a film with a lot of ambition, but never really lives up to it. It attempts to explain the origin of the Lament Configuration in an original and unique manner, but is just so slow and boring that I found myself just not caring. I don't remember being so bored the last time I watched this, but I think it's because I was doing something else while watching it, so I could divide my attention. This time, I devoted my full attention to it and just ended up disappointed.

I kind of wish that Bloodline had followed in the footsteps of Hellraiser III and had just decided to descend into campy ridiculousness. I think that would have been a much better approach to a story that leaps between 18th century France, the 90's, and the future. It's kind of a silly premise to begin with, and I think catering to that silliness more would have been helpful. Alas, it tries to play it seriously, to diluted effect. The effects are still great (well, the practical ones), apart from a few things that look a little hammy, and it even has some creepy moments, but these are sadly few and far between. I'd say the acting reaches an all time low in this one, somehow managing to be worse than Hellraiser III, with the given exception of Doug Bradley. Pinhead is always awesome, but he's a little underused in this one for my taste. All in all, Bloodline is kind of a wasted effort, not succeeding at enough to make it truly interesting or enjoyable.