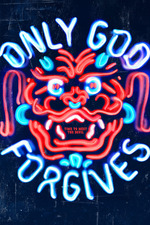 Well it seems I was too hasty in my praise of Nicoloas "Wingdings" Refn after my viewing of Drive. In that review I said that he had taken a huge step forward in the right direction, but now he's gone and taken two even bigger steps back with Only God Forgives, or as I like to call it, Moody Stares 2: Bangkok Brooding. In a lot of ways, this film exasperated me more than Valhalla Rising, because although that film was style over substance like this one, it didn't try to be deep or artsy. While watching Only God Forgives, I was almost drowned in this desperate, try-hard attitude that it exuded, Refn's feverish pandering to the art house crowd, hoping they would find some deep meaning that he of course "leaves open to interpretation," when in reality, it just isn't there. And based on some of the reviews I've read, it seems that a lot of people did find some sort of meaning in it, elevating it to "masterpiece" status. Sorry, Nicolas, I'm not buying what you're selling.

I think it would greatly benefit Refn to study the films of Harmony Korine, a director who is a master at saying a lot by saying a little. His films are incredibly stylistic and generally light on story, but they still manage to speak volumes. During my viewing, I couldn't help but see Only God Forgives as a Spring Breakers wannabe, although I know this isn't really possible, as the two were in production around the same time. It has that same neon-drenched haze, but while Spring Breakers uses violence and hedonism as social commentary, Only God Forgives isn't commenting on anything. It's violence for violence's sake, style for style's sake, Refn for Refn's sake. And seriously, enough with these frustratingly silent characters. They aren't ambiguous because of their silence, they're cheap and lazy. And speaking of ambiguity, that's another one of my biggest problems with this film. Refn is clearly trying to make his characters and their actions morally ambiguous, but they aren't. Instead, they are contrived and confusing, like this film in general. Only God Forgives cannot be played off as a surrealist film, because it isn't surreal. Surrealism implies dream logic, but the key word is still logic. The true surrealists have a purpose for every little detail they include, no matter how bizarre or weird. Only God Forgives exhibits an intense lack of purpose. I consider myself at least decently adept at detecting symbolism, and I found very little here, other than Julian's aggressively weird Oedipal relationship with his mother. I instead found myself asking "What is the point?" after far too many scenes. And that's ultimately the only question I was left with after the credits had rolled. I don't think even Refn knows the answer to that question.

Normally at this point in a review I would comment on the performances, but I really have nothing to say about any individual performance here because they were so nonexistent. There's nothing for the actors to act. This film consists almost solely of people walking slowly, arms stiff at their sides, giving each other the kind of looks that I give myself when I look in the mirror first thing in the morning: sleepy disinterest. The dialogue comes few and far between and when it does it's unimpressive and forgettable.

I guess since I've been so scathing, I'll try to end on somewhat of a positive note. Visually, this is probably the most gorgeous Refn film to date. The color palette is rich and luxurious, and beautifully complements the cinematography. But I'm just so frustrated at the lack of substance backing it up that its glorious sense of style is already fading from my mind. Is Drive destined to be Nicolas Winding Refn's one good film? I'd like to say that I probably won't find out, but since I keep subjecting myself to his films for some reason, I'm sure I will. One thing is for sure, Only God Forgives is aptly named, because I sure can't forgive Refn for the most recent nonsense he's vomited forth into the world.