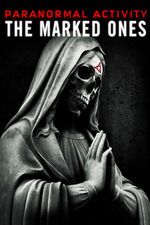 Paranormal Activity: The Marked Ones

I took my girlfriend to see this last night for her birthday. We both agree that this franchise has worn out its welcome, but we've seen all the others, and what can I say, we're invested, no matter how trashy and predictable they get. And trashy and predictable is exactly what these films are, so we went in with the lowest possible expectations. And because of our low expectations, we actually enjoyed ourselves. We had the whole theater to ourselves and with the memory of how terrible Paranormal Activity 4 was, we were pleasantly surprised when The Marked Ones was better than that abomination.

Don't get me wrong, this film adds nothing new to this incredibly tired, drawn out franchise. The jump scares are essentially the same as they are in the rest of the films and you can see them coming from miles away. In terms of story, you don't get anything new except you find a tiny bit more about the coven of witches that are responsible for all said paranormal activity, but this is essentially all you get from the previous two films anyway. I think what makes The Marked Ones more interesting is that we get away from the same old characters (for the most part) and are introduced to fresh faces that manage to be far more entertaining than the previous bland white women.

The Marked Ones isn't a good film by any stretch of the word, but it does manage to be entertaining enough and my girlfriend and I both had fun being able to loudly comment on all the stupid stuff that happened throughout. Part of the experience of watching films definitely has something to do with who you watch them with, and I've definitely had way worse experiences than with this one.