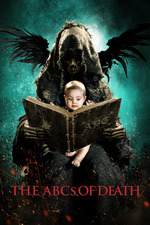 This is probably one of the most original films I've seen in a while. 26 directors from around the world were each given a letter of the alphabet and were told to create a short film about or involving death, giving a one word title that starts with, you guessed it, their assigned letter. The result is a film the likes of which I've never really seen.

The shorts range from scary, to funny, to bizarre, to beautiful, to surreal, to engaging, to downright ridiculous. But the one thing all the films have in common is originality. Each one left me wondering how the filmmakers stumbled upon that particular idea. In terms of the anthology as a whole, it's practically impossible to generalize the writing, directing, cinematography, etc. as it varies from film to film and considering how different the styles are. Most are live action, some are animated, there's even a claymation film for the letter T, which is titled "Toilet" and is probably one of my favorites. One is filmed almost entirely in slow motion, one is only a series of extreme closeups, and two are filmed completely in first person. As you can see, there's a veritable cornucopia of variety.

I'd say that almost all of my favorite shorts in the film are the ones by Spanish directors. I found them to be the creepiest and most engaging. There are several shorts by Japanese directors and these can be described almost solely as just extremely Japanese. They're the weirdest and the most bizarre, and sometimes the most disturbing. Also a good majority of the shorts are incredibly sexual, often in very disturbing ways, so I wouldn't recommend watching this with your parents or children or someone you don't want to share many uncomfortable silences with.

Overall, I loved The ABCs of Death. I thought it was beautifully executed and the directors were well chosen. It's an immensely entertaining film and even thought-provoking at times. The reason I only give it 4 rather than 5 stars is because there are certain shorts that I believe were just trying to see how ridiculous or shocking they could be and I felt like the quality of the storytelling suffered because of it. But this does little to hurt the film, and I definitely recommend it to all fans of horror, surrealism, or gore.