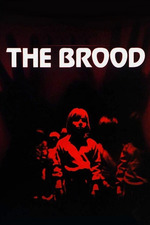 I love David Cronenberg because of his uncanny ability to make the most unsettling and bizarre stories while still being whip-smart and original with his scripts. The Brood seems to be a more understated work of his. I've never heard much hype around it and that just made it all the more surprising when I got completely sucked in. The Brood has quickly risen in the ranks to become one of my favorite Cronenberg films.

Inspired by his own divorce and custody battles, it may not be very subtle in its symbolism, but the raw emotion put into it by Cronenberg is easily felt. It's a story grounded in bitter reality but given a bizarre and horrifying spin that could only be accomplished by the master of body horror. I've found some of his earlier films to be pretty campy, but I was pleasantly surprised that this wasn't the case with The Brood. It never feels overdone or corny and some down-to-earth performances bring an added level of authenticity.

The effects are great, as always, an aspect that is never a disappointment when it comes to Cronenberg. Yet, another difference from his typical body of work is that The Brood chooses to make the effects more subtle, never striving to really show off, leaving a lot to the imagination, which I thought worked really well. This is a really solid entry in the body of work of a man who is quickly becoming one of my favorite directors.