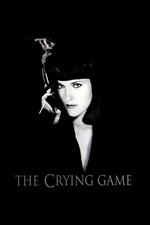 Watched as part of my "100 Movies to See Before You Die" Challenge.

Unlucky number thirteen. The Crying Game is a underwhelming film that takes itself really seriously and tries to be deep and profound, but fails miserably. As I was reading the premise Netflix provided before I hit play, I was a little concerned because it sounded like a sappy romance story concealed in a slick, sexy action thriller. And that's essentially what it is, except the romance doesn't stay so romantic (it just gets weird), and the action is clumsy and unexciting. The film is essentially split into two stories so different in tone that it almost feels like watching two different movies that have been spliced together but have overlapping characters. This is probably a major contributor to the fact that this film somehow feels longer than its two hour running time. It also doesn't help that the majority of the dialogue is completely unintelligible. This could be because of the characters' accents or because they mumble most of their lines, but it's more than likely a combination of both. Even Stephen Rea's accent somehow manages to sound fake, even though he's from Ireland. But don't even get me started on Forrest Whitaker. This is by far one of the strangest, most uncomfortable roles I've ever seen him in and his accent is wildly inconsistent. The acting is pretty mediocre all around, perhaps with the exception of Jaye Davidson, who is convincing to say the least. The Crying Game is just a big ol' slop-fest of sloppy acting, sloppy storytelling, sloppy pacing, and all topped off with one of the most annoying and overbearing scores I've ever heard.

The only reason I've given this film two stars instead of one is because of the element of surprise. I'm not going to spoil the twist (you'll have to be a masochist and just go watch it yourself), but it legitimately took me by surprise, and it's been a very long time since a film has done that. It completely blindsided me and for a few minutes, I was actually amused and impressed at what this film had accomplished. But... then it slid back into mediocrity and I completely lost that feeling. And I can safely say that I really have no clue why this film is on a list of movies to see before you die. There are dozens if not hundreds of movies that I could put in its place if the decision were mine.