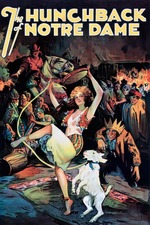 A Century of Cinema Challenge: 1923

I remember reading Victor Hugo's classic, The Hunchback of Notre Dame when I was a sophomore in high school. Hugo's overly descriptive writing style wasn't really my cup of tea at the time, and my memory of specific plot details faded over the years. Watching this adaptation brought back a lot of these details from the novel, and I was impressed to see how true to Hugo's work this film was. That being said, I found it largely unimpressive and underwhelming. The sets are grand and the production value is excellent for its time, but it falls short of being effective storytelling.

Perhaps my largest frustration with Worsley and Wyler's Hunchback is its reliance on heavy-handed exposition. The best silent films almost always excel in narrative storytelling through predominantly visual means, due to the inability to record audio. This is something The Hunchback fails to accomplish, instead using an exorbitant number of title cards with beefy chunks of dialogue or exposition. Having to read something between almost every shot really takes the viewer out of the film. When watching a silent movie, I want to be shown, not told. Another area this film falls short in is its lack of interesting, well-developed characters. This story has characters galore, but every single one of them is flat and boring, with the exception of Lon Chaney's Quasimodo.

And this is a huge exception. Lon Chaney saved this film for me. I would have given it even fewer stars if not for his brilliance. Not only is his makeup superb, but his performance and screen presence are marvelous. He seems to be the only actor in the film capable of portraying any sort of convincing emotions, and as Quasimodo is a very sympathetic character, Chaney excels in making the audience feel for the poor hunchback. It was only during his scenes that I my interest would be piqued, and he steals the show, especially with his acrobatics and mimicry.

The Hunchback of Notre Dame isn't a terrible film by any means, but it fails at being legitimately interesting or entertaining. It could be that I've been spending so much time recently with the German Expressionists, but this big budget Hollywood production failed to capture my attention for more than a few scenes. And the plaudits truly belong to Lon Chaney, because without him, this probably would be a terrible film.