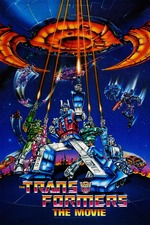 I'm reviewing this film because it is a huge part of my childhood and a major trigger of nostalgia for me. I don't know how old I was when I saw this movie for the first time, but before I was ten years old I'd probably seen it dozens of times. I just watched it again for the first time in probably 10 years, and as my roommate put it, I was "eaten by nostalgia."

Ultimately, this is a children's movie, and a children's movie from the 80's no less. More than anything else, this film is campy as fuck. I don't know how else to put it. The script is cheesy, the voice acting is silly and even mildly racist at times, and there are some absolutely dreadful 80's pop songs in it about having "the touch" or "the power" and how you in fact SHOULD count your chickens before they hatch. But all of that is beside the point. This film is downright fun, and I love it.

The showstealer is without question the planet-devouring Unicron, voiced by the late, so-much-more-than-great Orson Welles. This was his final role before his death, and during his scenes, the film becomes less campy by his presence alone. Without this character and his great voice actor, this movie would be much less enjoyable.

I may be biased because of how much of an impact this film was on my childhood, but I think this is a great film and I absolutely love it, even at 20 years old. I definitely recommend this film to anyone who grew up in the 80's or even the 90's like I did, or who loved and played with the Transformers action figures. It is worlds better than the recent embarrassments to the franchise shat out by Michael Bay, and I'll stand by that statement until the day I die.