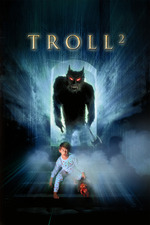 As much as I truly enjoyed this film, I can't in good conscience give it a rating higher than half a star, which, as a film, is a rating it absolutely deserves. That being said, Troll 2 is probably one of the greatest bad horror films I've ever seen. Plot holes galore, makeup that looks like it was done by a 4th grader, and some of the absolute worst acting in the history of film make this film a hilarious pile of the trashiest trash ever to grace any sort of screen.

I could go into exhaustive detail of everything I love about this film (which is almost everything), but that wouldn't do it the justice it deserves. Just got watch it as soon as possible. And don't be surprised when you don't see any trolls in Troll 2, because there are none. There are goblins instead and they suck. In the best way possible.