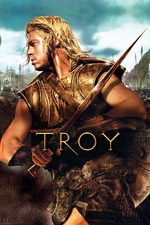 Troy is a self-indulgent, melodramatic mockery of one of the greatest stories in human history. This film literally hit all of the wrong notes with me. It's poorly written, sloppily told, and tries way too hard to be a spectacle. The Iliad is widely considered to be one of the greatest epics of all time, and this is a classification that it absolutely deserves. The problem with Troy is that it never once feels truly epic (a word I cringe to use, because it's been ruined by my generation), it just comes off as being almost nauseatingly melodramatic. The battle scenes look great, and the fight scenes are really well choreographed, but they feel like cheap effect rather than a well-crafted plot device used to enhance a good story. This is something the Lord of the Rings trilogy does well that Troy does not. It basically ignores everything that makes the Iliad a good story. It focuses on all the wrong things. It doesn't help that Diane Kruger's Helen has the personality of a wet turnip. It's not believable that any sort of war would be waged over her. Orlando Bloom as Paris has one of the most punchable faces in film history, and is all around just a terrible character. Brad Pitt is one of those actors that is either good or bad depending on how he's cast and directed. Unfortunately, this is one of those film where he's just bad. Achilles is almost as boring as Helen, and that's a serious problem.

Trying to condense the Iliad into a single film is a very tall order. The story, done right, should really be treated as a trilogy or a mini series, but because Troy is not done right, I'm glad it wasn't, because the three hour run time feels like eight because of how insanely boring it is. I was ready for this film to be over after about 30 minutes. The only reason I've given this film two stars instead of half a star is because the set pieces are well done and the fights are well choreographed. But good world building is not an excuse for bad storytelling. Homer is eternally rolling in his grave, knowing that this film exists.