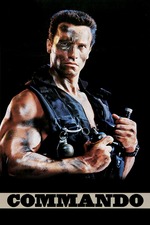 If you want to turn your brain off, laugh like an idiot and be thoroughly entertained for an hour and a half - is there any better choice than Commando?

I can't imagine anyone other than Arnie as the lead in this. He's never been better as a one-liner spewing, ass kicking machine and it cements him as, in my eyes, the greatest action movie star of all time.

Commando is so ridiculous it borders on parody of the action genre. The acting is awful, the dialogue is beyond cheesy and the action sequences and plot elements are thoroughly illogical and over the top. If this were most other movies, that combination would make it a terrible movie, but not Commando. The bad acting, cheesy dialogue and over the top action combine perfectly to make a charming and memorable experience that knows exactly what it's trying to be - mindless entertainment. And I love it.

I'm a firm believer in the island sequence being one of the greatest action scenes of all time. 10 minutes of Arnold mowing down and blowing up hundreds of generic henchmen that have accuracy that even a Stormtrooper would be ashamed of - it's damn fun and I can't help but have a giant shit-eating grin on my face every time I watch it, and the sounds the henchmen make when they die crack me up every time.

The final encounter is quite disappointing after the pure awesome that came before it. It fills the one-liner quota well, but let's face it, Arnold's enemy is a fat Australian guy that looks like Freddie Mercury that wears a chain vest and has one of the worst taches I've ever seen. I will however give thumbs up for a memorable and hilarious ending to the duel.

Commando is fucking awesome and I'll fight anyone that tries to tell me otherwise.