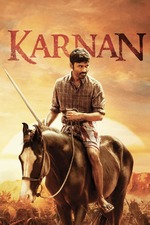 Karnan was a great watch. Mari Selvaraj did it again, this time taking at a real time incident based Kodiyankulam, Tamil Nadu. Santosh Narayanan's score and Theni Eswar's cinematography are as heroic as its central protagonist.

What I loved the most about Karnan is how characters interacted and how each relationship progressed as the story moved forward. This largely helped in affirming the idea of a rebellious collective helmed by an individual.
From biblical references to ancient Indian mythology, Mari Selvaraj has cleverly woven so many references, motifs and elements symbolising power, drive, emancipation and rebellion. The character names, the headless Buddha Idol, the sword, the donkey, the horse, Karnan's sister's soul and the headless painting etc.

The allegory of Donkey : ' burden of beast' who takes the burdens and responsibilities of others and is stubborn in nature is particularly more explicit. Even more powerful is its juxtaposition with that of a horse, powerful and swift otherwise but is initially useless until toppled down/owned by a donkey who broke down the shackles that weighed him down. The intermission scene is a powerful example of imagery story telling.
Karnan's impulsive nature and persistent trial to go all out rebel(along with the villagers) is literally like the donkey who wanted to free itself and run but still kept trying. The donkey finds the horse in itself in the second half when the collective comes ahead and together.

Mari Selvaraj deviates from the conventional usage of these biblical and textual elements and presents a re-telling of analogies challenging the status-quo of audience' mind. Who would otherwise see the Stubborn-ness of a donkey heroic?