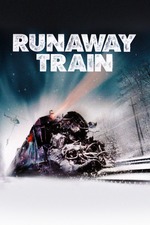 I had never heard of this film until I seen it mentioned in "Electric Boogaloo: The Wild, Untold Story of Cannon Films." A Cannon film about a runaway train, a hardened criminal Jon Voight and a menacing warden? Count me in.

The first thing that caught my eye when I put the movie on was Akira Kurosawa's name popping up. It was honestly one of the last names I would have expected to see. Apparently the screenplay is based off a script he had written and never got around to filming due to scheduling and such, and ol' Golan & Globus ended up with their hands on it.

The story begins in Stonehaven Maximum Security Prison, high the frigid mountains of Alaska. This prison is home to Oscar 'Manny' Manheim (Voight), a criminal so menacing that he'd not only spent the last few years in the hole, but the prison had welded the door shut! When the state forces the warden to release Manny back into the general prison population, it isn't long before he plans his escape.

Taking with him Buck (Eric Roberts), a young boxer doing time for statutory rape, the two set off across the winterscape, happily hoping aboard a train to their freedom. The only problem is, as they hop on the conductor hops off, suffering a heart attack at the same time. The train begins to barrel down the tracks at full throttle. By now the vindictive warden has set his sights on Manny, finally having a reason to take him out, and begins pursuing him by helicopter. The only other person aboard the train is Sara, a railway worker who isn't able to get the train stopped.

It takes a little while before they get to the train, but it's all necessary setup. It's paced well and when that train gets rolling it has some nicely energetic scenes. The acting was decent, though I was surprised by the two Oscar noms for the leads. I'll admit Voight's performance was pretty great - over the top and forever yelling. Any idea what accent they're supposed to have? Rebecca De Mornay does an okay job, thought her character was horrible. She's either a two dimensional woman in distress or just spouts off exposition. When she first shows up Buck threatens to rape her and like forty minutes later she's asking him to hold her.

"Runaway Train" has become known as one of Hollywood's only existential action movies, and though I didn't see much of it at first, by the end you'd have to agree. I really liked the ending they chose too, it played out nicely. It's light on the blood, but what is there is done well and used effectively. Danny Trejo also makes an appearance as Buck's advisory in the ring!