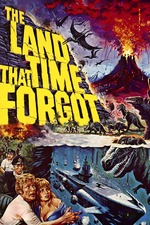 Whatever you may think about this film, you must admit it has a pretty kickass poster. I've seen a few of them and they're all great. Unfortunately the movie couldn't live up to them.

"The Land that Time Forgot" is cheesy 70s B-movie about a group of Nazi's and the survivors of a ship they destroyed finding the hidden land of Caprona - a lush tropical valley located in a volcano teeming with life, especially dinosaurs. It takes a while for them to get there, probably a good thirty minutes into the film, which up to that point is just people yelling at each other in a submarine.

The dino's are plentiful in all their rubbery puppet glory. There are also tribes of Neanderthals roaming about with decent enough make-up effects, considering the film they're in. One thing that always surprises me in these old dinosaur movies is the amount of bullets that get used. People just can't help but shoot everything that moves! I'm not saying I wouldn't be terrified if a dino was coming after me, but they kill a lot of them!

It's direction is nothing special and most of the action is handled quite clumsily; the acting is on par with the product and exactly what you'd expect from the time and genre. Despite the stuff I didn't like about it and the weird direction the story went, I had a pretty good time with "The Land that Time Forgot." It takes a while to get there, but then there's spectacle on display until the credits begin to roll.

A decent dinosaur movie with plenty to see (after the first half hour). It's charm makes up for any of it's shortcomings and is something I'd probably watch again at some point.