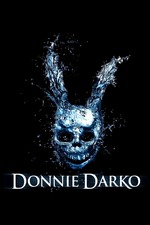 Donnie Darko is a film that has a very unusual style of storytelling and combines many different elements that work very well together.

First of all, this is a combination of mysticism and science fiction, in which supernatural elements have completely scientific explanations. The film also works well as a horror, despite the fact that nothing scary really happens. It is worth noting that the film is very successful in maintaining the intrigue - until the climax, we have no idea whether everything that is happening is real or is it the result of a sick imagination of a problem teenager?

At the same time, despite the mystical and fantastic background, the film is also a school drama about the life of a teen. We are introduced into the everyday life of Donnie Darko, who has many problems in his personal life (but also has a very cool name).
And in the end, this is a great movie about time travel. I would even say in some way it is the Butterfly Effect done right.

Of course, the star of the film is the young Jake Gyllenhaal. The guy is very talented. Despite the character’s melancholically attitude, he plays out a wide range of emotions and perfectly shows “entering” of the character into the supernatural world.

As for the other actors, I want to highlight Jenna Malone. The role is secondary, but I have long liked her as an actress and here she looked very convincing. In general, the cast is well-chosen. It was also fun to see Seth Rogen in his debut role and also Drew Barrymore.

I would also like to mention Frank. He has a very cool design that scares the hell out of every appearance.

And, of course, the ending. The scene turns upside down everything that has happened accompanied by a beautiful and touching song. For me personally, the ending made Donnie Darko one of the most likable characters in the cinema, and since I am quite a sentimental person, I could not do without tears.

In the end, I want to say that Donnie Darko is an incredible film and will definitely be on my list of favorites.

However, the ending left me in a depressed state, and for a long time I will not be able to move away from it...

Donnie Darko seems like a shitty movie, so I’m not gonna watch it! Do not expect any review from me.