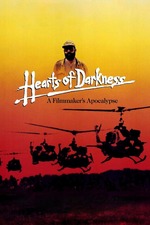 Watched this and then went on vacation, so don't have as much to write about a week later. Very enjoyable, crazy story, "Larry" Fishburne, age 14 might have been the craziest part.

Despite all the audio of Francis Coppola losing his mind and drowning in self-doubt, I got the sense that he had a lot of influence over the final product here. Which, he's got a lot of interesting things to say, but maybe skewed the story a bit?

Martin Sheen and Robert Duvall talking about their scenes was fascinating.