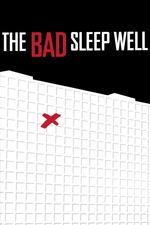 Between the well-known samurai films and his modern crime masterpiece High and Low, Akira Kurosawa made another currently-set film that showcased his effortless ability as a filmmaker.

Perhaps I'm wrong, but as far as Kurosawa films go, The Bad Sleep Well is not one that comes up in many discussions. That's a shame, because it really is Kurosawa at his best, weaving genres and creating his own trends, making whatever he wants to work.

Another of his many collaborations with Toshiro Mifune, this film sticks out from the other Kurosawa-Mifune films for me. First, while Mifune is the protagonist, he doesn't speak a word and doesn't play much of a part (and is not as easy to recognize behind the glasses) for over a half hour. Mifune typically thunders through his leading performances in these films, but in The Bad Sleep Well he is a silent assassin, mostly calm and quiet, executing his plans behind the scenes.

Like most Kurosawa films, The Bad Sleep Well is excellent at telling a story from multiple sides. While the main focus is on corporate greed and corruption, there is plenty of attention also given to the immoralities in Mifune's plan, an examination of Japanese business culture protecting executives and some wonderful back stories. It leaps back and forth between all these, never losing focus as the plot evolves.

Mifune is not the only one to deliver in this film. Ko Nishimura's portrayal of the mid-level exec Shirai is a wonderful version of over-the-top, crazed and paranoid after he's actually seen a ghost. The drunken son and childhood friend/accomplice/original Nichi are also terrific.

Perhaps a touch long, The Bad Sleep Well is nonetheless another top-of-the-line entry from Akira Kurosawa, as thrilling and incisive as any of his films, from it's unique start all the way until the rug is pulled out in the finale.

Hearts of Darkness: A Filmmaker's Apocalypse