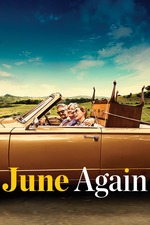 Unintentionally, June Again could be viewed as the motherly alternative to The Father.
Two films released closely together that depict dementia, coming to terms with ageing, familial tolerance, and boast a high-calibre central performance from a beloved screen veteran.
But to draw comparisons to The Father feels unfair, for one thing it was made in 2019 when Florian Zeller's creation was only known as a play.
June Again offers something special, a bittersweet concept that alot of us have probably thought about- what if, for a moment, an elder in our life no longer had the condition that has been decaying them?

Fittingly, this has been released in Australia just in time for mother's day. There could not be a more appropriate film to take your mother to, as it really is a tribute to our matriarchal figures who do everything to keep their families together.
Noni Hazlehurst delivers a perfect, moving portrayal as the firm but loving every-day woman so many may see their own mother in.

My only issue is that the plot is more predictable than it means to be, otherwise June Again is a beautiful film that deserves to stay in your memory.