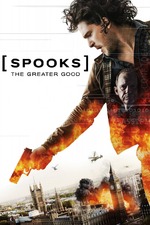 Given the visual style of the television programme, this is a film crying out for the sensibility of a Tony Scott, somebody who could translate the frenetic pace of the small screen onto the big. Instead, it becomes a pretty textbook example of how and why films 'elevated' from television source material so often fail. Spooks: The Greater Good explores none of the formal and technological intricacies of the TV show, and instead resorts to a series of Bourne Lite set pieces that when compared to the tangibility of the serial, are hopelessly artificial.

The Spooks television show is immersed within its own historical and ideological contexts, and in pursuing a serialised format, that rejects the prestige hallmarks of most espionage TV, is at the very least interesting. The movie, however, achieves none of the above.