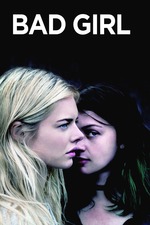 Throwing caution into the wind and after the dreck of 365 Days, I decided to watch the Australian thriller Bad Girl. And how was it?

Actually it wasn’t that bad if a bit schlocky.

The small cast do a pretty good all around, headlined by Sara West as Amy Anderson and Samara Weaving as Chloe Buchanan who are both damaged girls from adoptive homes. West as Amy starts off as abrasive and emotionally distant but becomes more open as the film goes on and after we learn more about Chloe, played to a T by a then relatively unknown Samara Weaving. Weaving starts off as friendly and charming but as the film goes on slowly starts to become a growling, sinister character. Benjamin Winspear and Felicity Price do a good job as Amy’s long-suffering adoptive family who try to do what’s best for her even if she doesn’t initially reciprocate and Rebecca Massey gives a decent turn as Detective Daniels.

Okay mate let’s get to the technicals.

Fin Edquist does a good job directing the film. Most of the film has a hand-held look to it, with the camerawork growing more uneasy as the situation with Chloe spirals out of control while also incorporating some stylish framing in some scenes. There’s also some unexpected surrealism as well with certain shots and dream sequences which he handles well even if it’s a bit weird. Edquist also wrote the screenplay which is based on a story by him and Stephen Kearney. It’s an easy to follow, well-excited script even if it is a touch silly and more than a little unsubtle (the movie right out the gate confirms the lesbianism isn’t just subtext) but the movie makes it work in it’s favor and it’s clear Edquist is fully committed to it. And sometimes less is more so I’m not complaining. One of the most interesting aspects of the film though is looking at Edquist’s filmography because, believe it or not, he primarily works on children’s films and TV, so it’s a little baffling seeing him go from Maya the Bee to doing an R-rated thriller.

Gavin Head does a surprisingly great job as the cinematographer of the film, in one of only two films he’s ever done. Head gives the film as a vibrant color scheme where you can feel the heat of the Australian sun while also filling the movie with rich, blown-up colors and dark, moody shadows, thanks in part to being shot on 35mm film. In particular the shots he has of the house at night really stand-out as he makes great use of the directors framing and the single color lights to craft some effective imagery. Warren Ellis also composed a synth-based but moody score that adds a sense of unease throughout the film and the editing by Simon Njoo (whose edited all of fellow Australian Jennifer Kent’s films) is good too. Also props to the production team for building a nifty looking house that looks straight outta Parasite.

And so to wrap up, Bad Girl was actually pretty good for what it was. While simplistic, the film works as a decent thriller with solid performances, good direction and eye-popping cinematography. Actually would recommend this.

Also just going to say it: the sex in this film was far sexier than anything in 365 Days though that’s not hard.

Nat is out! Peace!

The Meyerowitz Stories (New and Selected)